$69.99
SKU
SRF
Add to Wish List
Skip to the end of the images gallery 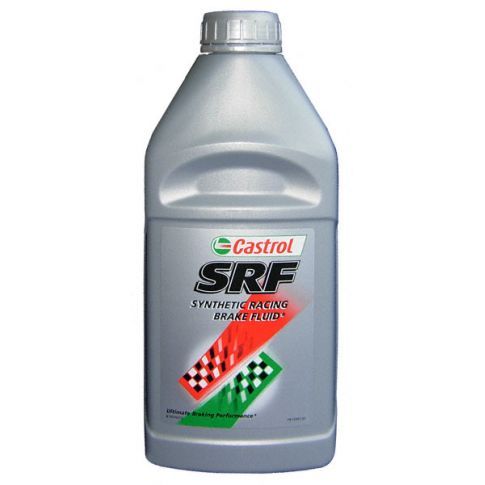 Skip to the beginning of the images gallery
Details

TECHNICAL INFORMATION: Castrol SRF Racing Brake Fluid is an ultra high performance product formulated specifically to satisfy the ever increasing stresses placed upon the braking systems used in international motorsport. The exceptional performance of Castrol SRF is due to a novel silicon ester technology pioneered by Castrol and unique to the extent that it has been granted patent-protection in numerous countries throughout the world. Castrol SRF evolved as a direct result of Castrol's ongoing Research and Development program for brake fluids which identified this silicon ester technology as providing considerable performance benefits when compared with conventional glycol ether borate ester fluids.

NOTE: DO NOT MIX CASTROL SRF WITH OTHER BRAKE FLUIDS [learn_more caption="Click for more details"]

Following exhaustive laboratory tests at Castrol's International Technology Centre in the UK, the final formulation for Castrol SRF was subjected to an extensive road-test programme on the Gross Glockner and Stelvio passes high in the Austrian and Italian Alps. It then underwent an independent track test program conducted by a famous Formula One racing team. Their assessment was that "Castrol SRF is the best racing brake fluid we have ever used." Subsequently, Castrol SRF was offered to top flight racing and rally teams throughout the world including most of the Formula One teams, the all-conquering Jaguar and Mercedes -Benz sports car teams and the Audi, Nissan and Toyota rally teams. Enthusiastic recommendation by these experts soon created an immense interest in Castrol SRF throughout the whole spectrum of national and international motorsport.

Today, Castrol SRF is regarded by the international motorsport community as being without equal and it is chosen not only by factory-supported teams but by private competitors throughout the world.

All conventional brake fluids used in cars and motor cycles are hygroscopic, that is, they absorb water from their surroundings. Strange though it may seem, the flexible hoses incorporated in braking systems are permeable to water and in time enough, water can find its way into the system via the hoses, and seriously affect the brake fluid's performance. This water reduces the boiling point of the fluid (ie, it lowers the temperature at which gas bubbles begin to form). When these bubbles form, they turn a virtually incompressible liquid into a mixture of gas and liquid which can be compressed quite considerably, thus severely reducing the efficiency of the brakes. In this situation, a driver finds that the brakes feel spongy. Brake-pedal travel will increase and it may be necessary to 'pump' the pedal to get the brakes to function effectively. However, when the brake fluid reaches a temperature at which the water in the fluid causes gas to be produced, which is equal to the volume swept by the piston in the rake master-cylinder, vapor-lock occurs and the brakes become inoperative. When this happens, the first indication the driver has that something is wrong is when he applies the brakes. The pedal goes down to the floor and the car carries on at undiminished - and possibly fatal speed.

The silicon ester technology in Castrol SRF addresses this problem in two ways. Firstly, Castrol SRF is less hygroscopic than conventional brake fluids - it absorbs less water in a given time. Secondly, unlike conventional glycol ether fluids, Castrol SRF reacts chemically with the absorbed water to reduce its adverse effects, thus preventing the fluid's high temperature performance and safety margins from deteriorating as rapidly as they would otherwise do.

It is strongly recommended that conventional brake fluid be drained from the system before flushing and re-filling with Castrol SRF.

The wet boiling point of Castrol SRF, 270 C, is vastly superior to the minimum requirement of 155 C demanded by the current US DOT 4 specification. The product's typical dry boiling point of 310 C is likewise outstanding. This ability to withstand temperatures in excess of 300 C, and its superior resistance to the effects of absorbed water, have established Castrol SRF as the world's premier fluid for the hydraulic brakes used in all forms of motorsport.