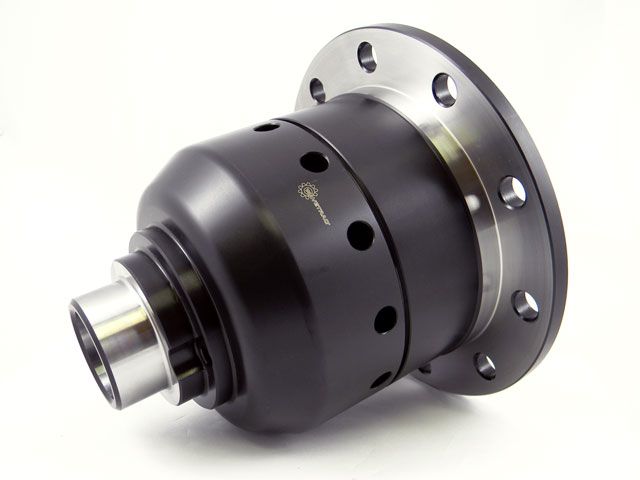 Skip to the beginning of the images gallery
Details

The problem: Loss of drive during zero or near-zero axle-load conditions. Zero axle-load is a condition that occurs during normal driving, but creates the most noticeable problems when driving in extreme conditions. Zero or near-zero axle-load is the condition that exists when there is ‘no-load’ applied through the drivetrain, when one drive wheel is nearly or completely lifted (often in aggressive cornering). It also occurs during the transition from engine driving a vehicle to engine braking and back, even with both drive wheels firmly on the ground.

Here’s how that loss of drive hurts you:

1) If you lift a wheel, all gear diffs except Wavetrac®, will NOT power the other wheel

2) During the transition from accel to decel, all gear diffs except Wavetrac, do nothing. Why does this happen? All gear LSDs (including Torsen, Truetrac, Quaife, Peloquin, OBX, etc.) work in basically the same manner: they divide the drive torque between the two axles, applying drive to each side, up to the available grip of each tire.   The amount of drive torque one wheel can get over the other is described as the bias ratio, a measure of the torque split across the axle. Standard, open differentials have a bias ratio of 1:1. They can only apply as much drive torque as there is available traction at one wheel. When one wheel loses grip, the total available drive is lost as well (at a 1:1 ratio).

3) All your power goes out the slipping wheel - along the path of least resistance. Torque biasing differentials offer increased bias ratios over open differentials. For example, if a diff has a bias ratio of 2.5:1, then it can apply drive torque to the wheel with the most traction (gripping wheel) at 2.5 times the traction limit of the wheel with the least traction (slipping wheel). This is a significant improvement over an open diff most of the time.   The problem is that when one tire has LITTLE or NO grip (zero axle-load), the other wheel gets ZERO DRIVE, because (basic math here): 2.5 x 0 = 0. Lift a wheel (or substantially unload a wheel) and you get zero axle-load on that side - that means that during the time the wheel is unloaded, the typical diff will NOT power the wheel that’s still on the ground. No matter how high the bias ratio, you get no power to the ground.

4) During the transition from accel to decel, where you have near zero torque on the axle, even if the wheels are on the ground, the typical diff is unable to begin applying drive torque until AFTER the zero torque condition is over. While this condition is generally short-lived, the fact that most diffs can do nothing during that time means that there will be a delay once the zero torque condition stops - creating a reaction time in the driveline. Precisely engineered wave profiles are placed on one side gear and its mating preload hub.

As the two side gears rotate relative to each other, each wave surface climbs the other, causing them to move apart very quickly, this creates enough internal load within the Wavetrac® to STOP the zero axle-load condition. The zero axle-load condition is halted, and the drive torque is applied to the wheel on the ground (the gripping wheel) keeping the power down. Some gear differentials rely solely on preload springs to combat loss of drive. The drawback is that you can’t add enough preload to prevent loss of drive without creating tremendous handling and wear problems at the same time. So, to avoid these problems, the preload from ordinary spring packs must be reduced to a level that renders them ineffective at preventing loss of drive.

The Wavetrac® is the only differential that can automatically add more load internally when it’s required. In the case where both wheels are on the ground during zero axle load, such as during a transition to deceleration, the Wavetrac device is able to prepare the drivetrain for when the zero torque condition stops, eliminating the delay seen with ordinary gear diffs. What this means for you as a driver is that power is delivered to the gripping wheels for more time and in a more constant manner making you faster and improving stability. The Wavetrac truly is different - and its innovative features can make a real difference in your car’s performance. [/learn_more] -Wavetrac-0514M - Fits 2005-2014 Mustang, Boss 302 and GT500